We are celebrating the life of First Admiral of the Fleet George Anson, 1st Baron Anson. The following is a short biography of his life;

On February 2nd 1712, at the age of 15, Anson entered on board the H.M.S Ruby commanded by Captain Peter Chamberlen, as a volunteer, he later continued with Captain Chamberlen to the H.M.S Monmouth. After spending his first year in the Royal Navy Anson was discharged, as the ship was about to pay off. Attempts to trace his service during the next three years have been unsuccessful. However, in May 1716 he was promoted to Lieutenant, serving in the fleet bound for the Baltic under Sir John Norris. Norris wrote from the Nore on 17th May that a lieutenant of the H.M.S Hampshire had requested to be put on half-pay, and that he intended ‘to commission Mr. George Anson, who is cousin to my Lord Parker.’

He continued in H.M.S Hampshire until she paid off in December 1717, and by March 1718 Anson was appointed second lieutenant of H.M.S Montagu. In October 1719, he was transferred to H.M.S Barfleur, Sir George Byng's flagship and was made Commander in June 1722 with the appointment to the small 8-gun H.M.S Weasel, which was deployed in the North Sea against the Dutch smugglers.

By 1724, he had advanced to the rank of Captain, appointed to the 32-gun Scarborough frigate, and dispatched to South Carolina. The instructions to protect the coast and the commerce against pirates and Spanish cruisers ultimately led to the War of Jenkins' Ear in 1739. (Today, the Ansonborough district of Charleston, South Carolina still commemorates his time there.) A few months later and a comparatively lack lusted call upon a Spanish boat, he received orders to act against the Spaniards wherever he met them, but the little war of 1726 passed over without any incident in Anson's career.

During the following ten years, Anson was in Command of four vessels. H.M.S Garland, H.M.S Diamond, H.M.S Squirrel and raising to the rank of Commodore in 1739 of H.M.S Centurion with his board pennant. Taking command of a squadron he was sent to attack Spanish possessions in South America.

In September 1740 Commodore Anson set off across the Atlantic. A six ship fleet, poorly manned and ill equipped to with stand the longitude at sea, Anson was determined to do what he could to fulfil the purpose of his voyage. With the loss of three ships by the rounding Cape Horn, they still managed to succeed in destroying the Spanish commerce, blockade the ports, and sack and burn the town of Paita, Peru. His plan to intercept a Spanish Galleon sailing between Manilla, Philippines and Acapulco, Mexico, was scuppered as they had just missed her return. Determined, he decided to follow the Galleon and sailed for China. By this time H.M.S Centurion was the last ship sailing out of the original six ships that had left England. What was left of the exhausted crew, hit by continuous visits from scurvy, had dwindled and diminished to just over a quarter of their original numbers.

Spending two months at Tinian, (Northern Mariana Islands), revived and refreshed but still weakened in numbers they were able to take the ship on to Macao, China and becoming the first British Warship to enter Chinese waters in 1742. Now less then 200 men, Anson crewed, Spanish, Indian, Dutch, Lascars and any other sailor fit and able, at Macao. Sailing with all creeds and colour, H.M.S Centurion had a crew of just over 250 men, and with this significantly small number for a ship of her size, managed to capture the Spanish Galleon Nuestra Señora de Covadonga on June 20th 1743 off the coast of Cape Espiritu Santo, Samar Island, Philippines. Had the Galleon been empty of cargo H.M.S Centurion would surely have been left a wreck at sea, but with his luck, the treasure burdened ship and the untrained crew of the Galleon allowed for Anson's command to be victorious.

Anson returned to Canton (Guangzhou), China where he sold his prize, the Nuestra Señora de Covadonga. For one last run with luck, on the homeward leg, as H.M.S Centurion sailed into the English Channel a thick fog shielded them from a French fleet which was circling. Allowing the ship, crew and money to safely make passage home with a triumphant return at Portsmouth. A procession of over 30 wagons fill with treasure and gold from the Galleon was marched through the streets of London, paraded with the ship's company marching, colours flying and bands playing. More than 1300 members of the original expedition had perished, and 145 returned to see England again. The exponential trove amounted to almost £500,000, with a rough conversion of over £50 million today.

By 1744, at the age of 47, Anson had become the second Englishman to circumnavigate the globe after Sir Francis Drake in 1580.

The following few years saw Anson promoted through the ranks within the Admiralty to Rear-Admiral of the White, Vice-Admiral of the Blue, and taking command of his flag on H.M.S Yarmouth. He joined the board of the Admiralty and became Member Parliament for Hedon, Yorkshire.

In 1747, with his fleet, Anson defeated the Marquis de la Jonquière at the First Battle of Cape Finisterre during the War of Austrian Succession. The fleet in total capture four ships of the line, two frigates and six merchantmen, with a bounty amounting to over £300,000. This only surmounted Anson's previous elevation and he become Lord Anson, Baron of Soberton, Southampton.

In April 1748, Anson married Lady Elizabeth Yorke, daughter of Philip Yorke, 1st Earl of Hardwicke. Their marriage was always described as happy and though not without want, they had no children.

Voyage Round the World was published in the same year, with Anson's circumnavigation of the globe proving to be a continuous popular feat of navigation and military triumph, and still is today. Once again the success of his work was shown and he was promoted to Admiral of the Blue in 1749, later becoming Vice-Admiral of Great Britain on July 4th 1749 and receiving a final promotion to Senior Naval Lord on the Admiralty Board in November 1749.

He worked to improve and reorganise the navy, building of ships, improvement of stores and guns. The new code of articles of war was drawn up and and passed in 1749 remaining the law until 1765, which the corps of marines, as then planned, and definitively formed in 1755, is the same as it is today. Largely credited with several of these measures was placed by Lord Sandwich at the head of the executive and in June 1755 Anson became Lord of the Admiralty.

In June 1761 Anson was advanced to the high rank of Admiral of the Fleet. He died quite suddenly on June 6th 1762 at his home at Moor Park in Hertfordshire. Anson was buried in the family vault at Colwich and the title of Admiral of the Fleet died with him. His wife, Lady Elizabeth, had died June 1st 1760, and his very large property went to his sister Janetta, wife of Mr. Sambrooke Adams, whose son George afterwards inherited also the family estate of Shugborough, and took the name of Anson.

Admiral of the Fleet George Anson is undoubtedly a prolific attribute to British navigation and British Naval history. It is to his Voyage Round the World that the knowledge and his legacy is still used and celebrated today.

'Sir, you have vanquished the Invincible and Glory follows with you' 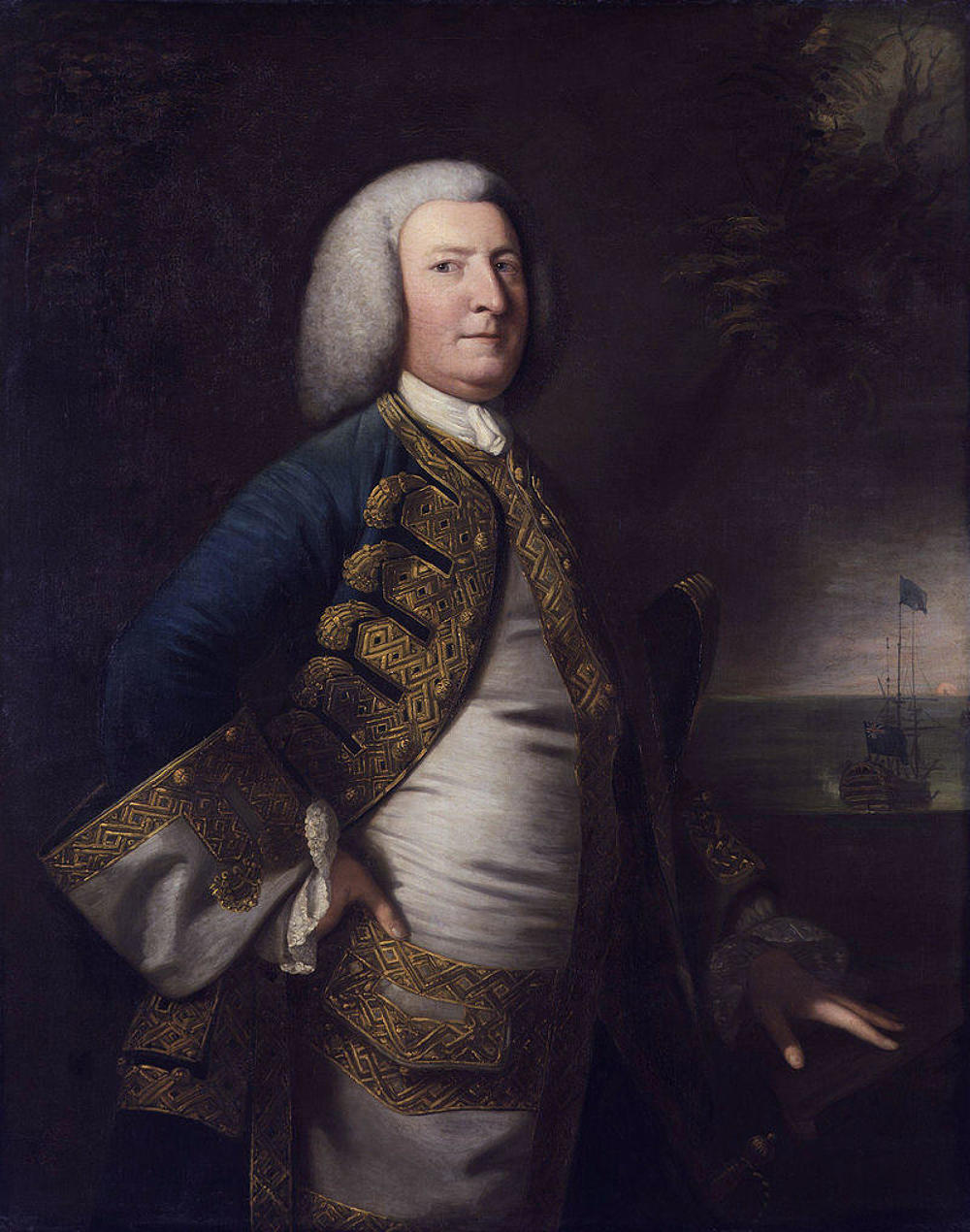