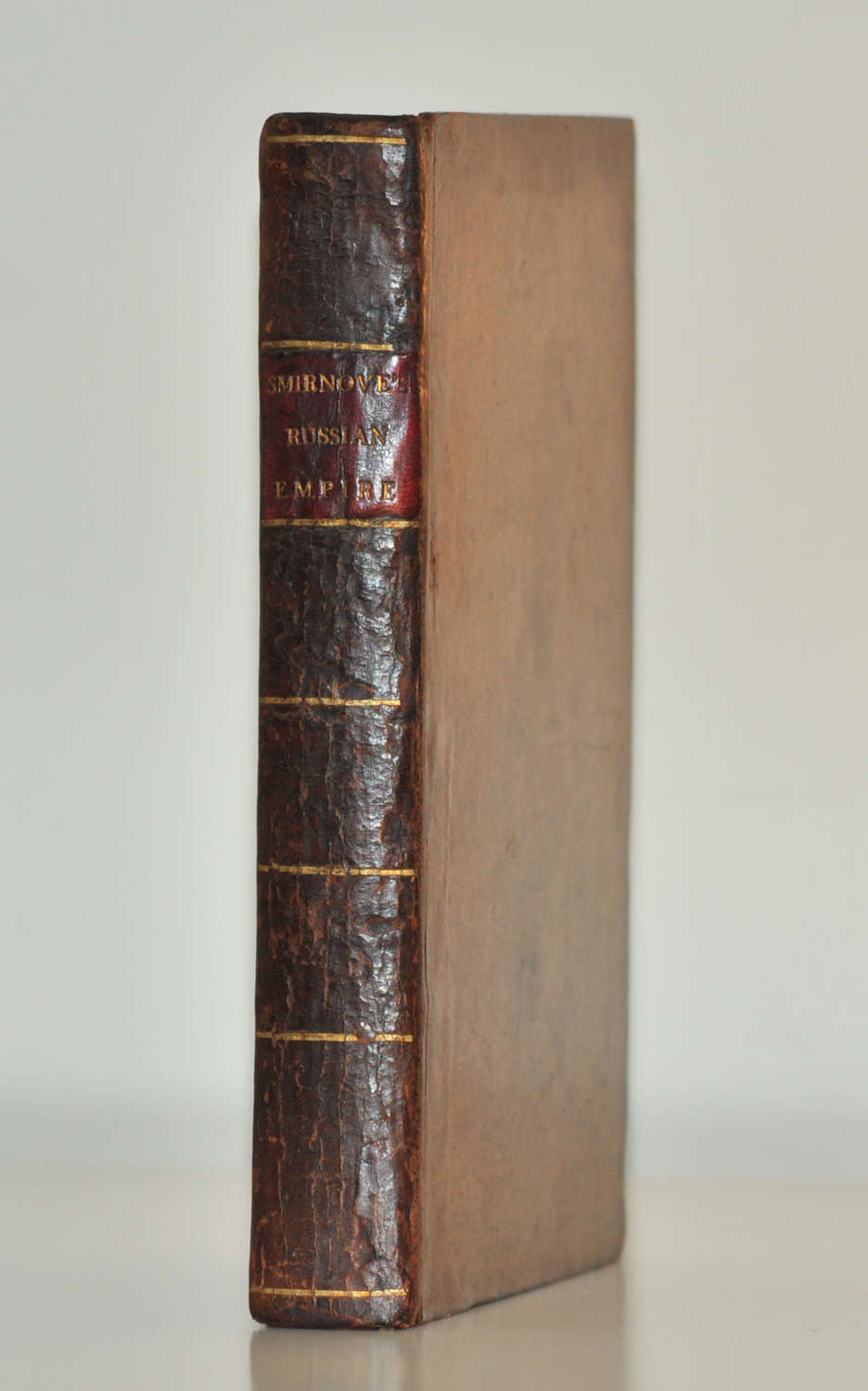 Pleschééf Survey of the Russian Empire

Pleschééf (Captain Sergey) Survey of the Russian Empire,
According to its present newly regulated State, Divided into different Governments; Shewing their Situation and Boundaries, the Capital and District Towns of each Government; Manners, and Religion of the various Nations that compose that extensive Empire; Seas, Lakes, and Rivers; Climates; Commerce, Agriculture, and Manufactures; Population and Revenues; Mountains, Minerals, Metals, and other Natural Productions. Translated from the Russian, with considerable Additions, by James Smirnove, FIRST ENGLISH EDITION, 8vo, half-title, xxiv, 336, [22] pp., folding map of the Russian Empire and folding plate of arms & uniforms, contemporary calf, joints repaired, London: J. Debrett 1792

The title page states "The Third Edition, Published at St. Petersburg," but apparently referring to the edition from which the present work was translated; Smirnove, the translator, was chaplain to the Imperial Russian delegation to Great Britain. Bookplate of H.F. Macomber.

A detailed narrative of the many different ethnic peoples who made up the population of the Russian Empire.

Besides Russians, there are two other sorts of inhabitants. The Laplanders, or Lopari, in the distrićt of Kola. They are called the Russian Laplanders; they live in huts, have very large herds of rein-deer, whose flesh and milk serve for their sustenance. The Semoyads, a straggling numerous people are idolaters. This race begins at Mezene, and extends to Enisseisk, or even as far as the river Lena. They dwell in huts, live on reindeer flesh, but chiefly on salmon, which probably gave them the name of Semoyads, or Samoyeds, which in the Russian language means salmon-eaters. They pay yasak(currancy), which is collected at Poustozersk. Novaya Zemlia, a barren, rocky, inhospitable island on the Northern Ocean. It is divided from the continent by the Straits of Vygat, and belongs to the government of Archangel, the inhabitants of which frequent this island for the sake of killing sea calves, mountain foxes, and white bears, the traffic of which brings them a very considerable profit. The northern part of this government is very mountainous but the southern abounds with very excellent meadow lands fit for breeding of cattle. The horned cattle of Kholmogor are very famous for its extraordinary size. There is a great quantity of larch growing about the river Pinega, which is used to great advantage for ship building. In the district of Kholmogor there is a private dock-yard, and in that of Onega there is a great number of salt-pans. In consequence of the badness of the foil, which is not fit for cultivation, and the feverity of the climate, the inhabitants of this place are obliged to import corn for their maintenance, and to employ themselves in killing of whales, fishing, hunting, and gathering of eider down, for which purposes they go to the White Sea and the Northern Ocean, as far as Spitsbergen. The goods exported from Archanghelsk into foreign countries are, corn, hemp, flax, and linseed oil; Russia leather, peltry, sea-calves teeth and skins; seal-skins, tar, pitch, train oil, and tallow; and from Onega there is a very considerable exportation of mast and other timber. The inhabitants of Archanghelfk are famous for turning in bones, of different sorts, several curious playthings, which they dispose of in different cities to very considerable advantage. In the Solovetskoy island they get clean talc, or Moscovy glass, which is disposed of in the neighbouring places.